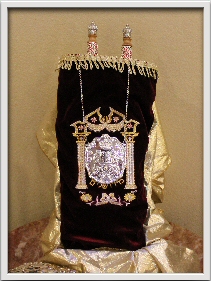 It is with hearts full of nothing but joy that we write to you this month!!  We pray that each of you had a glorious fall feast season.  We are still in the afterglow of our time at these feasts.  Each one of the feasts, beginning with Yom Teruah and the “opening of the gates”, and moving through a time of repentance at Yom Kippur and going “through the gates”, then on to rejoicing at Sukkot, was full of the presence and Spirit of Elohim.  Every single service and all day long, was truly enveloped in the Spirit.  Our theme this year is “Soaring in the Spirit” and truly we are experiencing that in a very powerful way.  The Ruach HaKodesh (Holy Spirit) is doing a mighty work in His people all around the globe, and for that we are very grateful.  There is a revealing by His Spirit and through His Torah that is causing us to hunger and thirst for His righteousness.

We look forward to the day that we won’t have to say goodbye to friends and loved ones after Sukkot because we will be dwelling together for eternity with the greatest Torah Teacher of all…Yeshua HaMashiach.

We are pleased to announce that Daniel Botkin of Gates of Eden Ministries will be at River of Life Tabernacle, November 14th.  He will speak at 10:00 a.m. for the Shabbat service.  We will have Oneg as we usually do following the service.

Daniel was born and raised in Illinois. He studied art in college and graduated from Illinois State University with a B.S. in Art in 1971. In 1972 he became a born-again disciple of Yeshua after reading through the Bible. He married his wife Teresa in 1975, and 9 months later they went to Israel and worked for a year as house parents at Jewish Voice Broadcast youth centers in Jerusalem and Nahariyah. Daniel and Teresa spent a little over 2 years in Israel. They studied Hebrew, worked on the archaeological dig on the Temple Mount, worked on a kibbutz, and took groups of young people from their home congregation for 6-months stays in Israel.

In 1985 Daniel went to graduate school at Illinois State University and took linguistic courses to be a teacher of ESL (English as a Second Language). He taught ESL for 4 years at Western Illinois University, then moved his family to New York and taught ESL for two and a half years. While in New York, the Botkin family lived in an Orthodox/Hasidic Jewish neighborhood and attended a Messianic Jewish congregation, where Daniel served as an elder.

In 1995 Daniel moved his family back to Illinois, started publishing Gates of Eden bimonthly and started Gates of Eden Messianic Congregation. Daniel and Teresa have one son, Benjamin, and 6 daughters – Shoshanna, Betsy, twins Abby and Anna, Emily, and Autumn Sunshine.

Daniel’s articles and cartoons have been featured in First Fruits of Zion, Messianic Outreach, The Jewish Press, Petah Tikvah, Messianic Home, and other Messianic and Christian publications. In 1997 Daniel received an honorary Doctor of Literature degree from the Evangelical Reformed Methodist Church. Daniel has also received various awards and grants for his artwork which has been exhibited in art shows across the nation. Daniel has also travelled and spoken in churches, Messianic congregations, and at Messianic conferences.

Attached is the November Torah Calendar. The Scroll has now been rerolled and we pray that we will run the race well as we enter into another Torah Cycle learning about our GREAT Elohim…YHVH and His dear Son, Yeshua!!!

We love you with our whole hearts!!